We arrived in Nagoya, Japan’s fourth largest city, under a rainy afternoon sky. We took the Kintetsu train two stops to the Kogane station and walked the short distance to our Airbnb. The apartment was located next to the train line and under the intersection of two highways in the southwest corner of Nagoya, and yet, at $71.50 per night, it was our most expensive accommodation to date. Budget accommodation had proven surprisingly hard to come by in Nagoya. The available hostel options all seemed crazy: we’re talking $30+ per dorm bed, and we think dorm beds only make sense if we are saving real money over other options. Despite its unusual location, the Airbnb gave us our own private space with a small cooking area, and it was perfect for exploring the city.

Nagoya was a surprising place. On the one hand, it is pretty much another big city. On the other, there seemed to be stuff happening everywhere in the city while we were there. We visited the Atsuta Shrine one morning and there were tons of visitors wearing kimonos and nice suits. There were a surprising number of four-year-olds dressed in kimonos and babies in frilly white dresses as well. There were so many nicely dressed people (and hardly any tourists besides us), we started to wonder if there was something special going on, and if perhaps, the shrine was closed. However, there did not seem to be anywhere to buy a ticket, and no one seemed to indicate we should not be there, so we wandered around.

The Atsuta Shrine is in a beautiful wooded park. It is one of Shinto’s most important shrines and home to Sun Goddess Amaterasu, one of Shinto’s most important sacred spirits. Behind the shrine, we found a ritual purification pool and a large camphor tree that is more than 1000 years old. There was a television crew here conducting an interview with a special person who was being followed around by his entourage. It was clear something was happening, but we are not sure what. It is possible it was related to Emperor Naruhito’s enthronement which was celebrated in Japan from October 22nd to October 31st.

Later in the day, we visited the Osu Kannon temple, a popular Buddhist temple originally built in the 13th Century in another location. It was moved to its current site in the 1600s to protect it from floods and rebuilt in the 20th Century after being damaged by fire in the 1800s. We stood in a short line to ring the gong inside and then went to the nearby Osu Shopping Arcade for some bubble tea.

We were on our way to an art gallery in a mall Eric had read about when we saw heard music playing. We walked over to see where it was coming from and found a Halloween parade! There was a marching wind orchestra playing “YMCA” and everyone was wearing pumpkin hats and unicorn horns! There was another band nearby dressed in full Halloween costumes. We did not know Japan celebrated Halloween!

We went into the mall across the street and wandered through a few stores. There were multiple floors of electronics, and there was advertising EVERYWHERE! It was very overwhelming. We found a small art gallery on the 8th floor which had some pretty paintings mostly of scenes from Florence and cities in France. Unfortunately, the big art museum on the 7th floor was closed because they were changing exhibits, so we headed back home.

The next morning we ventured out to see Nagoya Castle. Jess has seen many castles in her life, but Japanese castles are an entirely different thing. They often have moats (which may or may not go all the way around or be filled with water), and a stone base, but the keep on top more resembles a massive house. Construction of Nagoya Castle was completed in 1619 for the Owari branch of the ruling Tokugawa family. Most of the castle was destroyed in air raids during World War II. The current keep was reconstructed in 1959, but it is in the process of being torn down and replaced with a wooden keep and is no longer open to visitors until its anticipated completion in 2022. We were not able to tour the keep, but we did visit the castle’s Honmaru Palace, the primary residence, which was reconstructed in 2018.

Honmaru Goten Palace was once regarded as one of the most beautiful castle palaces and a stunning example of the shoin-zukuri architecture that forms the basis of the modern Japanese house. The rooms were adorned with delicately painted gold screens and walls depicting scenes from Japan. Unfortunately, it was destroyed by air raids in 1945 and reconstruction only began in 2009. The palace was rebuilt using traditional Japanese materials and techniques, and the paintings were carefully reconstructed by Japanese artists. It is once again a gorgeous palace now open to visitors. 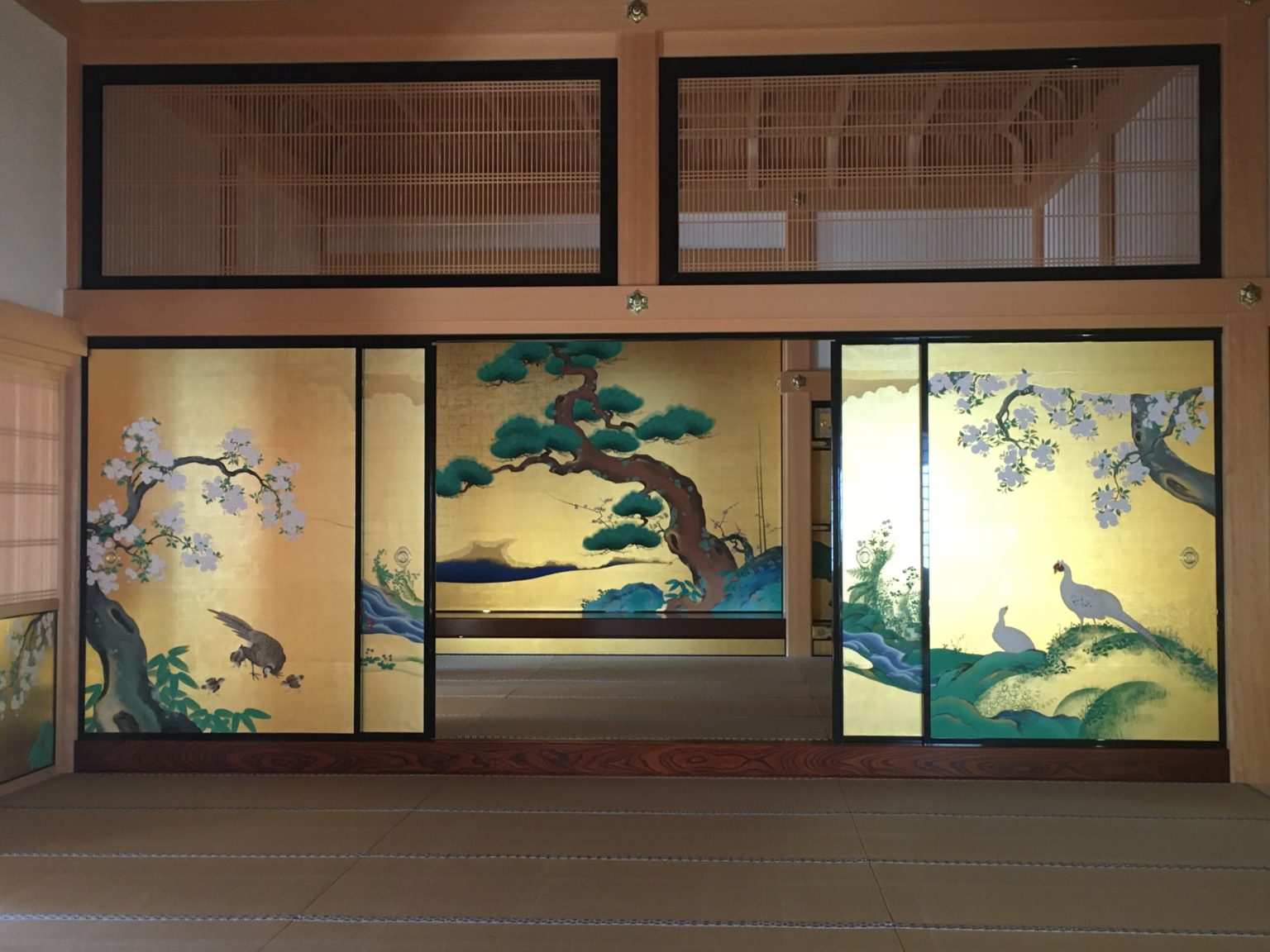 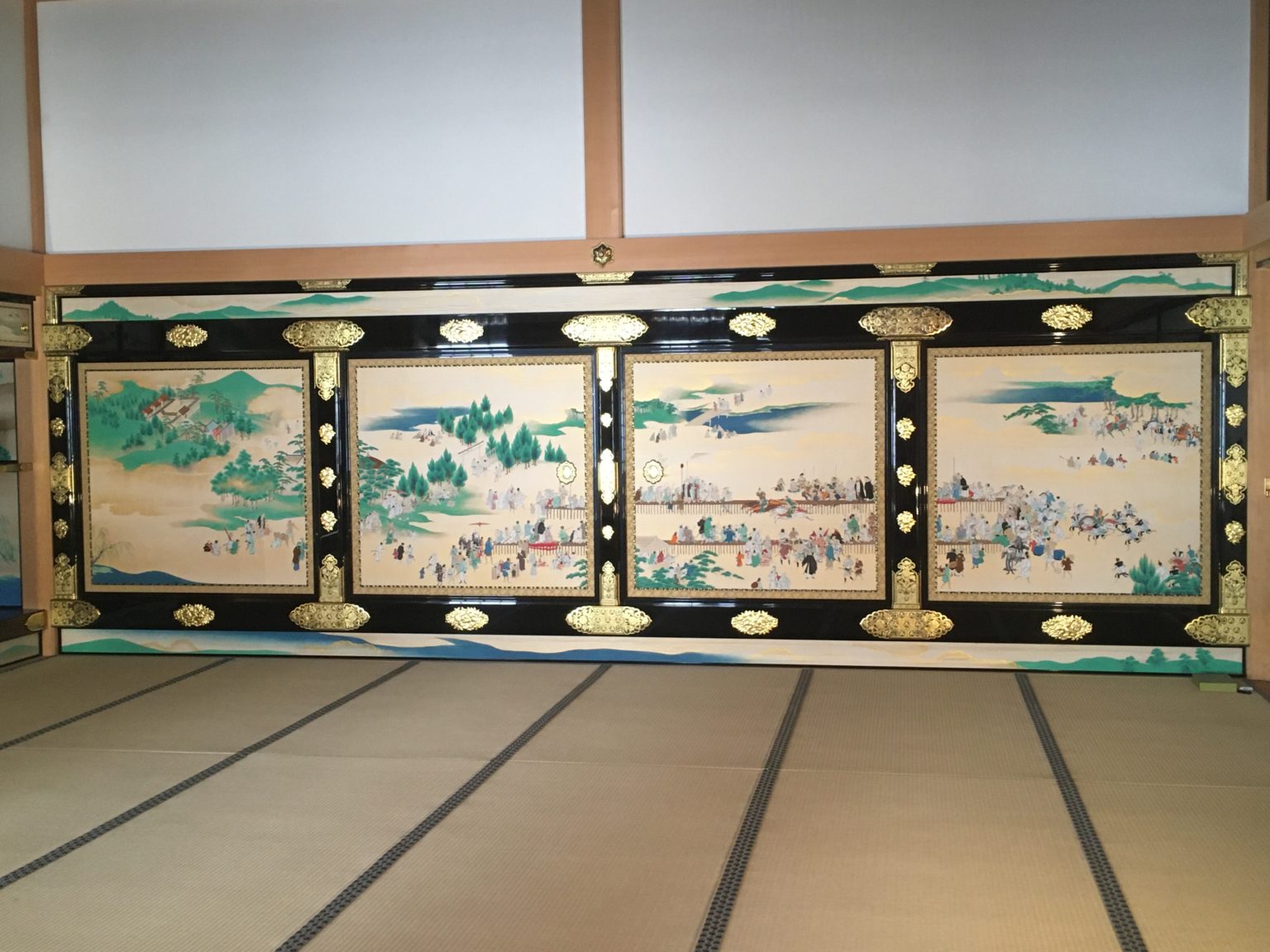 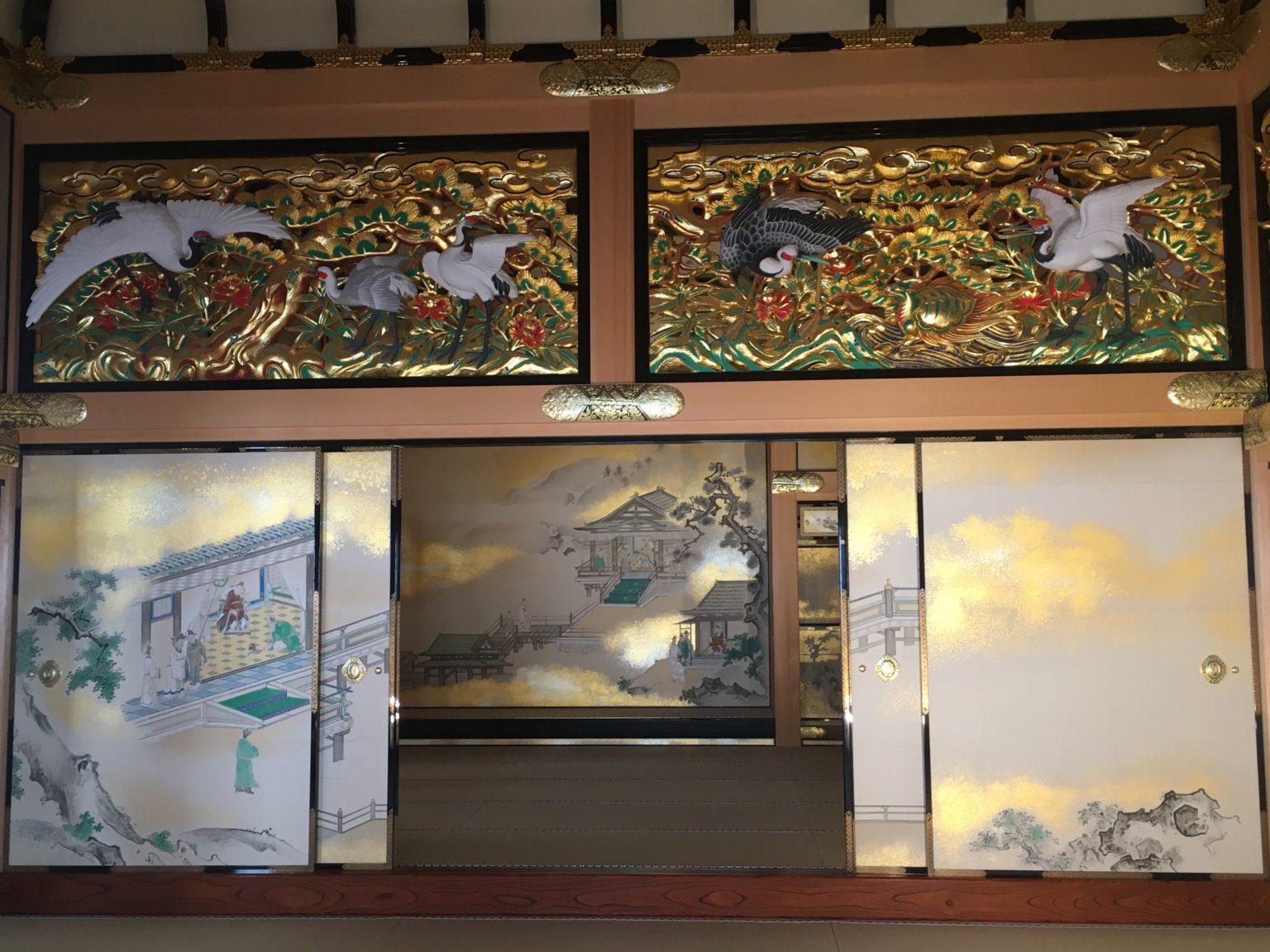 Before we left the castle, we had to check out the ninja samurai show that happens at 1pm in the castle gardens. The samurai led the group from the main gate to the stage and kicked off the show. Each samurai came on stage did a special move complete with sound effects and announced their name, it was just like an anime come to life! We imagine the samurai eventually fight the ninjas, but we did not stay too long as we had to get to the Toyota Commemorative Museum of Industry and Technology across town.

Not realizing how cool it would be, we arrived with only an hour and half to explore. The museum costs Y500 per person ($4.62) person and is worth every penny! The first half of the museum is dedicated to Toyota’s start as a textile company. Who knew the company originally made sewing machines and weaving looms? The textile industry was critical to the development of modern Japan and Kiichiro Toyoda (yes, with a d) was able to adapt the loom technology his father, Sakichi Toyoda, developed to making cars.

The museum is very interactive. There are hundreds of machines relating to the textile and car industries. On the textile floor, there are guides who do interactive demonstrations of the spinning and weaving technology and buttons you can press to watch certain parts of the machines operate.

On our way to the automobile section, we stopped in a classroom where a man was doing a demonstration of the forge. He showed us a three-stage model of the process in which a piece of metal is stamped into part of a piston rod. After showing us the model, he took a small cylinder of metal and put it in an induction heater to heat it to 1200 degree C, in about 30 seconds! Then he picked up the piece of red hot metal with pliers and started the three stages of forging. BAM! BAM! BAM! The 120-ton forge press pushed the small cylinder into a wrench shape (rough die), then a more finely forged figure (finishing die), and finally broke the new miniature piston rod out of the mold (trimming die). At the end of the demonstration, he asked if we wanted one of the pieces he had forged. Of course! Eric was so excited about the forge press, the miniature piston rod will probably become a magnet proudly displayed on our fridge in the future.

In the automobile section, there are many exhibits on the various features of cars, e.g. safety features like seat belts and crash protection and how they test the vehicles, the future of cars’ fueling technology, colors and models of cars, etc. There are also lots of interactive exhibits of machines used in the production of cars.

In retrospect, we could have spent the entire day in this museum. As it was, we did not manage to see the whole thing and we had to rush through the floor with the automobile machines.

As we were leaving, we caught a special recital by a violin-playing robot.

That evening, we made Korean gimbap (Korean version of sushi) for dinner and prepared rice triangles (“sambak kimbap” in Korea and “onigiri” in Japan) for breakfast since we had to leave early the next morning. Our triangle forming skills might leave a little to be desired, but it made for a great breakfast snack before we caught the Hida Limited Express train to Takayama.