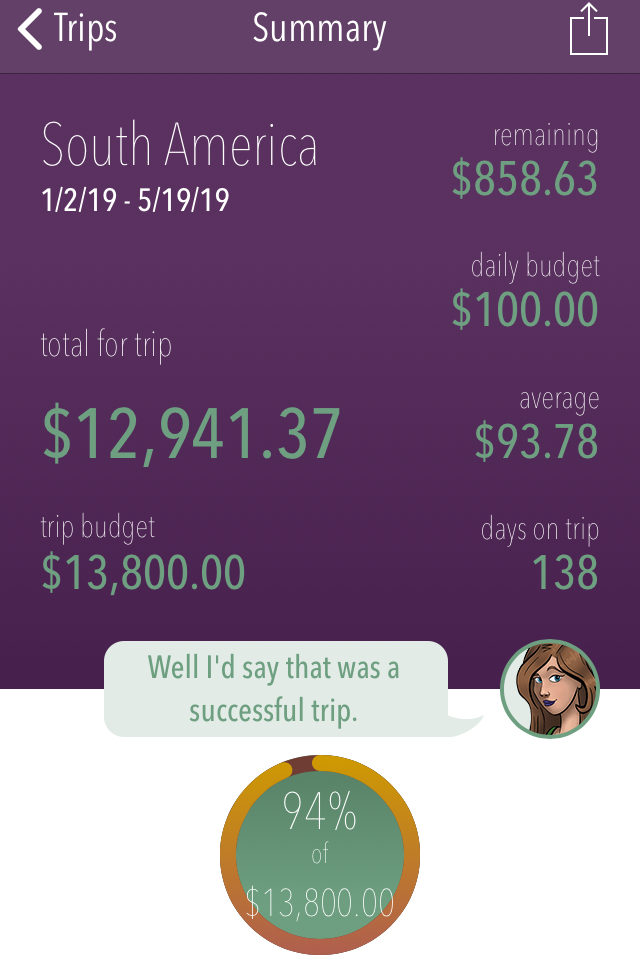 Four and a half months in South America flew by, and we can’t believe we’re already back in the United States. Here is our summary of Phase 1:

END_OF_DOCUMENT_TOKEN_TO_BE_REPLACED

We heard about Bolivia Hop from Sophia, the woman we met on our walking tour in Sucre, and we thought it sounded like a fun way to see Lake Titicaca while crossing the border from Bolivia to Peru. Bolivia Hop is a recent expansion of Peru Hop and so far only goes to Copacabana and La Paz. Peru Hop has seven destinations in southern Peru and you can hop on and off along the route and stay as long as you like in between.

END_OF_DOCUMENT_TOKEN_TO_BE_REPLACED

We spent our last week in Bolivia exploring Bolivia’s two capitals: Sucre and La Paz. The two cities have a strong rivalry regarding their status as THE capital of Bolivia. In Sucre we learned the constitution designated Sucre as the capital, but in 1899 the government moved the Legislative and Executive branches to La Paz for economic reasons leaving only the highest courts in Sucre. Sucre claims this makes La Paz only an administrative capital, and Sucre remains the true capital. Officially, Sucre is right but it doesn’t stop the inter-city debate. For us it wasn’t that important since we were visiting both.

END_OF_DOCUMENT_TOKEN_TO_BE_REPLACED

Today we did a crazy thing: we went into an active Bolivian silver mine and saw the miners in action. Many people argue it is inappropriate and even unethical to visit the mines because the working conditions are so poor. However, mining is such an important part of Bolivia’s history and economy that we thought it was important to see and understand first hand what this work is like.

END_OF_DOCUMENT_TOKEN_TO_BE_REPLACED

We had expected to see Tito again bright and early for our Uyuni tour, but he had been specifically requested by a group of French tourists overnight, so it was Milton who showed up at 7:30am to pick us up. END_OF_DOCUMENT_TOKEN_TO_BE_REPLACED

Serendipity disguised as misfortune had us spend two whole days in a town that most travelers skip and we couldn’t be happier.

END_OF_DOCUMENT_TOKEN_TO_BE_REPLACED

You can sleep in the bus until 6am

After crossing the border from La Quiaca, Argentina to Villazón, Bolivia we found ourselves waiting for seven hours in the new bus terminal for a 9pm bus. We knew the bus ride was only 5 hours, but we were told we could sleep in the bus until 6am, so we agreed. The route is mountainous and windy, and at one point it seemed almost certain we would drive off the edge as the driver slowed to a crawl and drove around around a sharp curve. At 1:30am, the bus driver started blaring this delightful tune (turn up volume for full effect) as we entered the city and continued to do so until we arrived at the bus station in Tarija 15 minutes later. There he told us he had somewhere else to be and we had to get out.

END_OF_DOCUMENT_TOKEN_TO_BE_REPLACED

For the last two weeks we have been volunteering on a winery in Valle de la Concepción just outside of Tarija in exchange for free accommodation and lunch. We were expected to work six hours a day, six days a week with Sundays off. March is harvest season, so our timing was perfect and we got to see most of the wine making process. The winery is an artisanal operation where virtually everything is done manually. It’s hard to convey how manual the whole process is.